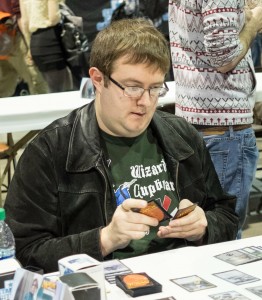 The most important advice I can give you is simple. It’s pretty simple if you’ve ever played casual magic, but it bears repeating. When you sit down to cube, remember:

You set the rules on what you determine fun to be, but you certainly aren’t playing for high stakes on the MTGO Vintage Cube. $10 gets you in the door, and a winning record lets you run it back for free.

Do the things you enjoy. If you can’t stand playing mono red aggro, just don’t. Who cares if you’re wheeling Goblin Guides and Fireblasts? Somebody else can do that.

As for strategy, there are some guidelines. However, there really aren’t any hard rules. The closest I can think of is to always pick Sol Ring in the first pick of pack one, given the chance. It’s the best card in the cube, and I can’t imagine a deck that wouldn’t want it.

Try To Do Something Broken

Vintage cube is a different beast when compared to any other type of cube. If your deck isn’t capable of doing something outrageous, you’re going to be at a disadvantage.

There are some cards that do this on their own. If you open a card like that early in the draft, try to build your deck in a way to maximize it. Don’t draft a Tinker and then pass some giant artifact to put into play. Pretty simple stuff.

If you aren’t lucky enough to open a busted card, there are plenty of ways to work around that. The MTGO Vintage cube is filled with tons of colorless mana acceleration. Ramping out powerful threats a turn or two ahead of schedule is a good way to crush your opponents. Several of the most powerful mana ramp cards are in a league of their own, but signets are abundant enough that you can usually find a couple.

Make Sure Your Deck Has a Plan

This should be your general strategy for any cube environment. In a regular draft, your goal should be to draft enough playables with a decent curve. If that’s the best you can manage in cube, you’re probably in trouble. Decks typically aren’t midrange grindfests. You’ve got aggressive decks that curve out into Koth of the Hammer or Armageddon. You’ve got control decks with Mana Drain and Elspeth, Sun’s Champion. You’ve got every kind of combo deck under the sun. Almost all of them beat midrange decks unless those decks can do something broken.

Channel into an Eldrazi titan is broken. Tinker into Blightsteel Colossus is broken. An early Mind Twist for ~4+ cards is broken. Reanimating Griselbrand on turn two is broken. Floating six mana and casting Upheaval is broken.

Doing something broken is generally presenting a problem that should win the game within a couple turns unless the opponent has a specific answer. Removal spells are often ineffective at dealing with some of these high power plays. Counterspells work, but you run the risk of falling behind if your opponent simply chooses to deploy other cards while you hold up mana. The best ways to fight these strong plays are to counter with your own strong play or to simply aggro them out before they can set up. 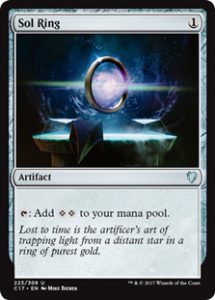 These cards are in a class of their own. Most artifacts that generate mana do so at a rate lower than they cost to cast. These offer a boost on the turn you play them and often stick around to permanently accelerate you. The outlier there is Black Lotus, which just gives you an astronomical temporary boost.

The other cards essentially have mana ramp built into them, as they are costed far less than they should be. Newer versions of Ancestral Recall and Time Walk have been costed somewhere between five and six mana (Time Warp, Jace’s Ingenuity).

Cards That Do Dumb Things 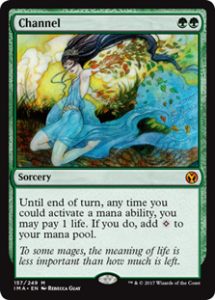 Emrakul, the Aeons Torn, Ulamog, the Ceaseless Hunger, Ugin, the Spirit Dragon, Karn Liberated, Myr Battlesphere.
Take a look at these cards. Now, imagine putting one into play on turn two. That’s why channel is nuts.
As a disclaimer, I do think Channel gets significantly worse when you are trying to cast colored spells. If you are doing a big combo turn, it still has some high upsides. If you’re using it as a green Seething Song, you’re doing it wrong. 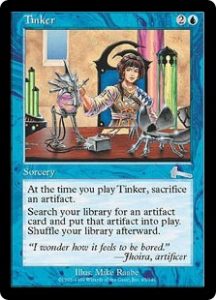 Tinker takes a slight hit compared to Channel for the targets it can put out, but it replaces that with less strict requirements for casting it. Tinker cheats any artifact into play early, with the upside of not needing to get it into your hand first. You should be able to figure out the route to victory fairly easy with a turn three Inkwell Leviathan.
If you find yourself with a Tinker, make sure you pick up sufficient cheap artifacts. You want a handful of signets and maybe some other cheap targets to sacrifice. It’s a miserable feeling to draft a sweet Tinker deck, only to have one or two cards that can actually activate it before turn five. 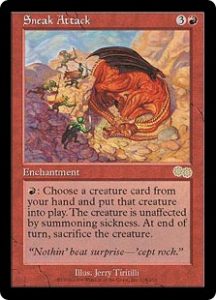 Sneak Attack is my personal favorite card in cube. I often find myself pushing for various strategies that get giant creatures into play early, and Sneak Attack offers repeatable service for that at an incredibly low opportunity cost. It is incredibly hard to activate Sneak Attack twice in a game and manage to lose. Once again, you need to build your deck around it. 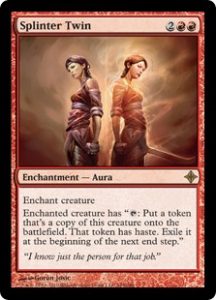 Are you familiar with Modern from a couple years ago? I’m not really sure I need to say more on the subject. It’s hard to go wrong with two card combos that deal any amount of damage. Splinter Twin and Kiki-Jiki both work for cloning, and Deceiver Exarch, Pestermite, Restoration Angel, and Zealous Conscripts work as targets. As a warning, Restoration Angel and Splinter Twin are not a combo. 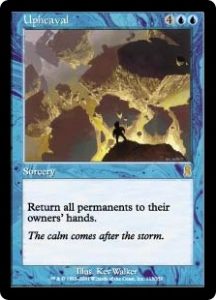 If you’ve been playing Standard recently, you might have seen a copy or two of River’s Rebuke cast. Ideally, Upheval is the same card except your opponent doesn’t have any lands to redeploy permanents. Upheval belongs in a deck that can generate a lot of mana, since you need to cast it with some mana floating. If you can deploy a few turns worth of cards using your excess mana, you should be able to easily lock up the game. 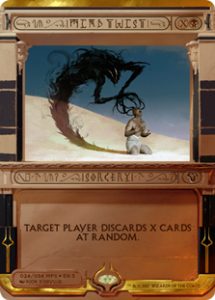 You really only need to get hit with a Mind Twist once to understand how backbreaking it is. Losing a pile of cards essentially kills your next several turns, as you likely need to draw both lands and spells to actually start playing again. Unlike several other cards on this list, Mind Twist loses some value if you can’t fire it off early. You can usually still manage to nab a couple cards with it, even late in the game. 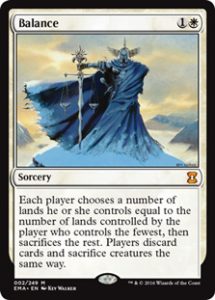 Quite possibly the most improperly named card in the game, Balance is anything but a balanced effect. Artifact ramp is the best combo, as Balance ignores it, but you don’t really have to work at making Balance good. It works as a board wipe if you need it, a mini Mind Twist if you need it, and occasionally a Stone Rain or two.

After those, you start falling more into archetypes instead of individual cards. Entomb is a great card, but there are several work arounds if you can’t find it. Big mana artifact decks do all sorts of crazy things, but the focus can range from Tezzeret, Agent of Bolas to Wildfire to Mindslaver locks, with plenty of overlap and alternative routes.

One Other Card Category – Signets 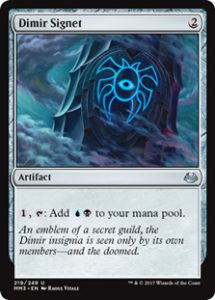 If you never wind up with any signets in your draft, you probably aren’t drafting them high enough. If you’re consistently taking them second and third pick, you’re valuing them too highly. Stake a claim on some powerful cards, then fill in the gaps with some signet picks. There are a few exceptions; if you are specifically drafting an artifact deck, you should pick them highly. Inversely, if you are playing a lot of aggressive decks, you should almost never have them.

The Vintage cube is the best place to set this deck up, as the signets offer a high concentration of mana ramp. The reverse is true too, making it less likely that a single Wildfire can completely lock out an opponent. That makes Wildfire decks more of a category of big mana decks. Wildfire is good value, and it protects against swarms of creatures. Planeswalkers and big artifacts tend to win the game. 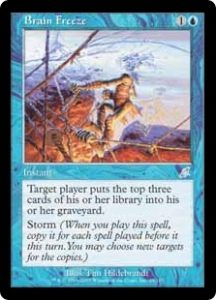 Storm in cube is a strange beast, and difficult to play. Yawgmoth’s Will is probably the most important card to find, but wins are really difficult if you can’t actually find a storm win condition. Beyond that, some mana acceleration is important, as is some card draw.
Honestly, I haven’t successfully stormed someone out in Cube. Watching some people try it on stream will give you a general idea of what to do, since you can’t really compare it to Modern or Legacy storm. My general guideline is you’ll probably lose a handful of drafts forcing Storm before you start to get the hang of it. It’s fun enough that it might be worth it. 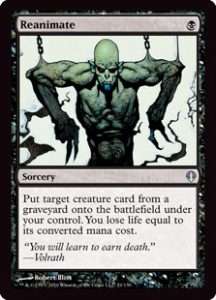 Getting big creatures into play fast is one of my favorite strategies. You need a combination of a discard outlet and a reanimation spell, but there are a lot of interchangeable cards to get the job done. Entomb is probably the single best card for a pure reanimator deck, since it combines tutoring and a discard outlet. However, I still think Sneak Attack is single best card you can find. It wins the game on it’s own without too much work, and you can still reanimate a creature after it dies. 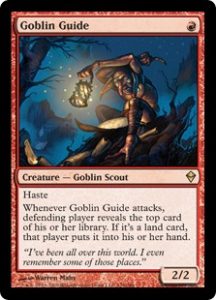 Goblin Guide, Sulfuric Vortex, Koth of the Hammer, and Fireblast are still looking for a home. Mono red still plays the roll of fun police, trying to kill people before they can do much of anything. This deck does the worst job of utilizing the power cards in Vintage Cube, but the hyper efficient mana ramp is still good. 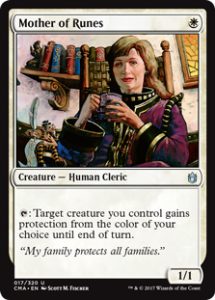 Pretty much the same idea as mono red, white is trying to kill the opponent before they can do anything fun. Instead of burn, white usually tries to Armageddon to keep the opponent off balance long enough to deal lethal damage. 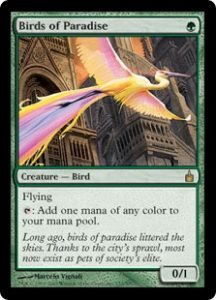 Green loses some power in Vintage cube as all the colors get access to significantly more ramp. However, Natural Order and Channel are incredibly strong cards looking for a home. Craterhoof Behemoth still kills people just as well as it does in other cubes.

There are plenty of other strategies you can try, but these are some starting points. Have fun with the cube while it’s out!